The World Health Organisation (WHO) has just released a new report showing a probable causational link between Glyphosate and cancer. The WHO’s International Agency for Research on Cancer (IARC) compiled information from 17 cancer experts from 11 different countries to reach this conclusion.

This is not a fresh accusation, it’s been suggested that both Monsanto and WHO knew the potential risks associated with Glyphosate up to 35 years ago; the Environmental Protection Agency (EPA) reported that the herbicide was ‘unlikely to be dangerous’, but Monsanto requested the details of this study be kept as ‘Trade Secrets’, suggesting an attempt at a cover up.

Speaking to GMwatch, Dr Brian John said; “The evidence shows that by 1981 both Monsanto and the EPA were aware of malignant tumours and pre-cancerous conditions in the test animals which were fed small doses of glyphosate in the secret feeding experiments. Although concerns were expressed at the time by EPA committees, these concerns were later suppressed under the weight of conflicting evidence brought forward by Monsanto, some of it involving the inappropriate use of historical control data of dubious quality. None of these studies is available for independent examination.”

Mounting evidence, linking Glyphosate to cancer and other health scares:

-In areas where GM crops like soy are grown on a large scale, they are often close to residential areas. In 2002 reports  of infertility, stillbirths, miscarriages and cancers were made by residents and doctors living close to farms favouring the roundup chemical. 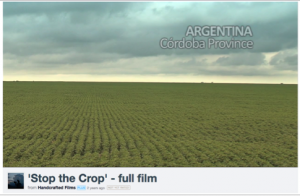 Watch this powerful video by Handcrafted Films on the affects that glyphosate has had on Argentinean residents.

-In Hawaii on the island of Kauai there have been reports of asthma, severe skin rashes, nosebleeds, allergies and migraines, as well as other birth defects, thought to have been caused by Monsanto’s leading pesticide.

Monsanto and the Glyphosate Task force  are disputing the decision to classify glyphosate as a group 2A carcinogen. They claim that the WHO has ignored studies proving that glyphosate is safe for use. The WHO report is based on independent research carried from companies holding no allegiance to either Monsanto or an opposing anti-GM organisation.

You can get involved in the debate and sign your name to get glysophate banned in the EU, US, Canada and Brazil here.