‘Seed Matters’ is a short film by Jason Taylor capturing some of the voices from The Great Seed Festival which took place in October, 2014 to raise awareness of the importance of seed, and to celebrate seed, food and biodiversity.

Featuring short interviews with Mama Udongo, from the Community Centred Knowledge group, Patrick Mulvany from the UK Food Group, Shane Holland from Slow Food UK, Lawrence Woodward from Beyond GM, Liz Hosken from the Gaia Foundation and using footage from the Festival weekend as well as from further afield, the film brings together beautifully the key issues around seed and food sovereignty that the Festival sought to highlight.

‘A Commons Sense’ is another new film, also from filmmaker Jason Taylor, looking at biopiracy in India from the perspective of ecologist and renowned seed conservationist, Dr. Debal Deb. 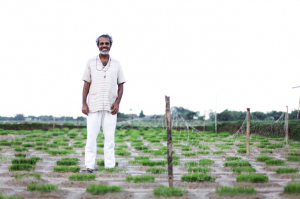 “The US patent act has a clause to say nothing can be patented if it is prior public knowledge. But they define ‘public’ as US citizens. It doesn’t matter if billions of Indians and billions of Africans know the use of any material, know the existence of those germplasms or animals or plants. It doesn’t matter, because the Americans don’t know them.”

The film draws attention to the massive bias present in our current food and farming system towards multinational agribusinesses whose prime motivation is profit. Dr Debal is one of just a handful of scientists around the world who are standing up against the global exploitation of people and our planet. From small independent donations and money made from research projects with some progressive organisations, he has managed to set up small farms to grow and conserve over 1,000 varieties of indigenous rice, documenting and publishing their characteristics so they can be protected against bio-piracy.

In other seedy film news, we are delighted to announce that Seeds of Sovereignty is now available in Amharic and French.

Seeds of Sovereignty shares the stories of African communities embarking on a journey to revive their traditional seed diversity and take back control over their food systems. Through the voices of local and indigenous farmers, it provides a guide for anyone looking to revive traditional, diversity rich, seed and farming systems around the world.