Last month, an array of events organised under the banner of The Great Seed Festival reconnected people across the UK with the humble, life-giving story of seed.

The Garden Museum in Lambeth hosted the hub of festival activities, bringing people together to recognise, wonder at and celebrate the seeds that feed us. The festival sought to confront the threats that seeds face and to sow a new future – one in which our connection with seeds and the reproductive aspect of gardening, growing and farming is profoundly rekindled in the hands of our producers.

The lush grounds of the Garden Museum, a medieval converted church and gardens, provided the perfect setting to celebrate the seeds that are the origin of all we eat and the world we cherish. Embellished with bunting strung from pillars, bright tablecloths and piles of colourful cushions, the belly of the museum boasted arts, crafts and cooking galore dedicated to this celebration. 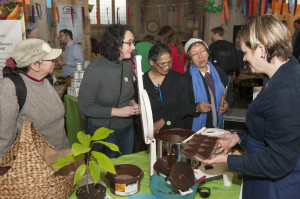 Workshops run by Rococo Chocolates and The Dusty Knuckle Bakery were thronging with visitors on Saturday and Sunday. Churning out flatbreads slathered in peppers, tahini and herbs and dark chocolate hearts, the link between good seed and delicious food was impossible to ignore.

Wafted by the heady aromas of bread and cocoa, old crafts celebrating seed as inspiration were revived. Storytellers from the Secret Seed Society regaled young and old with the secret stories of seed through a cast of vegetable characters. The northern textile craft of ‘hooky and proggy’ was taken with great aplomb. Taught by Rachel Phillimore, visitors hooked and progged their way to two beautiful works of art, depicting a seedling and intricately striated soil. 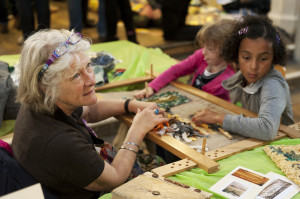 Everywhere beautiful stalls exhibited the vast diversity and abundance of seed types from around the world, offering visitors the chance to get hands on and discover the seeds’ origins. Books animating the journey of seed to plate, a treasure trail, seed bombs and London Freedom Seed Bank’s ceremony on Battersea barge evoked the creativity of seed and its endless variety of manifestations.

This hands on-reconnection with seeds, their flavours, forms and histories infused the festival with a sense of rediscovery.

Seed is… under siege

The Great Seed Festival weekend was seized as an opportunity to raise awareness of the current threats to seeds, the losses they have sustained in recent history and what this means for the future of food and farming.

Two trends dominated talks, workshops and impromptu discussions over the weekend. First, that seed diversity has been in rapid decline, a period in which we have lost a staggering 75% of agricultural biodiversity. This means less resilience to climate change and other shocks to our food systems. 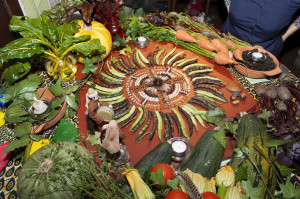 Second, that this loss of diversity is largely due to the conversion of agri-culture into agri-business. A shift that entails the concentration of control over seeds into fewer and fewer hands, the use of increasingly carbon- and chemical-intensive farming methods that contribute to climate change, biodiversity loss and the dispossession of small-farmers, who provide 70% of the planet’s food from just a fraction of the land.

Lawrence Woodward of the Beyond GM campaign delivered a rousing speech on the ills of patenting seeds for profit, urging citizens to take action in the UK and beyond to keep GM out of our fields and off our shelves.

Ben Raskin of the Soil Association held a workshop asking ‘what have seed laws ever done for us?’ This was well complemented by a talk by Haidee-Laure Giles of War on Want as Saturday’s events dovetailed with the Europe-wide Day of Action on TTIP. Ahead of the demonstrations in London, she described how this new EU–US free trade deal threatens to open the door to unlabelled GM products and severely dilute food and environmental safety standards within the EU. 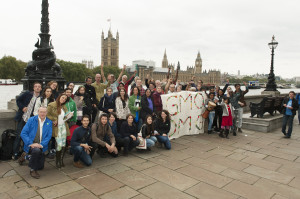 The London premiere of the new film GMO OMG, The Gaia Foundation’s Seeds of Freedom and an impromptu dramatisation of the losses seed has suffered, performed by the Community Centred Knowledge Group, added dynamism to proceedings.

The festival’s programme clearly revealed how the recent story of seed has become one of loss and debt, serving only a handful of business interests while farmers, growers, eaters, ecosystems and the global climate suffer the fall out. As with the food we find on our plates, this problem has its origins in the unjust treatment of seed, which has become the global status quo.

Perhaps the most remarkable aspect of the festival was the hopeful, pro-active attitude of the 500 or more visitors. Those already aware of the importance of seeds came together with those making this discovery for the first time. Both threw their backs into the effort to protect and revive seed diversity and sovereignty, recognising these as the pre-requisites for food security itself. 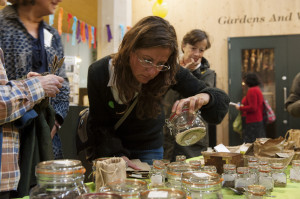 Initiatives, ranging from the immediately tangible to tackling the complexities of international policy, popped up throughout the weekend. Mini anti-GMO demonstrations organised by Beyond GM and Wholefood Action were staged on the riverside opposite parliament.The Heritage Seed Library and others offered the chance for people to take away endangered seeds, while workshops, such as that held by Guardian blogger Kim Stoddart, encouraged and empowered people to save and share seeds.

The festival united The UK Food Group, World Development Movement, Land Workers Alliance (LWA),The Gaia Foundation, Let’s Liberate Diversity and other groups, to showcase how seed monopolies are being resisted worldwide, to strategise and to share inspiring stories of revival from Sussex to Spain to South Africa.

Bringing people together around the totem of seed, The Great Seed Festival is already bearing fruit. Since the festival weekend a new LWA South West Seed Saving Co-op has been born, thousands of seeds not found in any regular catalogue have been stored away for the sowing season and discussions are already beginning about what comes next.

Best of all, the festival has demonstrated that when people locate the seed within their own lives and see how it’s sovereignty or control affects our food supply and the lives of farmers worldwide, they want to protect it.

Just as our forebears and millions of small farmers around the world have shown us for some 10,000 years, the festival has demonstrated that we can find positive alternatives to our current food system that celebrate agricultural diversity, not monocultures; operate within the planet’s limits, not beyond them; work with nature’s processes, not against them; and value the people who produce our food and those who eat it above profit and property.

The Great Seed Festival will not solve the problem of seed monopolies or halt the loss of seed diversity alone, but by creating a space for us collectively to find the seed again it has acknowledged and popularised a fundamental fact:

Everything starts with seed.